'Zrihtati' or arranging the things in Slovenia

Meet part of Slovenia's identity through the eyes of David and Renee from Chicago, USA

What I Learned About Human Connection in the former Yugoslavia

In the young democracy of Slovenia, human ties - not the digital ones - make things happen

At first, I was just hoping to find the grave of a friend in Slovenia, part of the former Yugoslavia.
Instead, in a small medieval town, I ended up paying tribute to my friend, Jože (Joe) Bernik, a former member of the country's Parliament - in a way that I could not have imagined. Thanks to an old tradition of human connections known as 'zrihtati', I ended up in Joe's boyhood home with his nephew and friend, swapping stories over homemade walnut liqueur.

Earlier this fall, my wife and I headed to Slovenia from Chicago for a 12-day vacation - mostly to see a part of the world that we were interested in; not just to find Joe's grave. Slovenia's population is about 2 million, smaller than the city of Chicago's.

In central Europe, bordered by countries including Croatia and Hungary, tiny Slovenia has been repeatedly invaded over the centuries. Slovenia gained its independence from Yugoslavia's Communist regime in 1991. Over the centuries, farmers and other workers in Slovenia have learned to fend for themselves and rely on a network of relationships. That tradition, 'zrihtati', is how you get things done. You don't look online to find a plumber, explained one of our guides, Jernej Žakelj - Bart, 38. You call your uncle, who knows a guy, whose nephew is a plumber. To help me pay my respects to Joe, Mr. Žakelj would use 'zrihtati'.

I had worked with Joe, a native of Slovenia, at a law firm in Chicago in the 1990s. He was warm and courtly. Over long lunches, we would talk about travel, family, and the geopolitical changes in Central and Eastern Europe.
We kept in touch by email after Joe moved back to his homeland about 20 years ago. He served in Parliament from 2000 to 2004 and was a key figure in the country's independence movement. Joe passed away in 2011 at the age of 87, before I could manage to visit him.

I was hoping to set that right. Before we left home, I found the address of the cemetery where he is buried, in the town of Škofja Loka, population 12.000. We would be staying in Slovenia's capital, Ljubljana, about a half-hour's drive away. Mr. Žakelj volunteered to take us there and, ignoring the cemetery's address, said we should try to find someone who knew Joe.
Uh, OK.

In Škofja Loka, Mr. Žakelj immediately headed to St Jacob's, a 15th-century Catholic church in the heart of the old town. On a church bulletin board, he found the phone number for the priest. No answer. Meanwhile, we found the Bernik family plot, and I left a stone in tribute, a tradition in my own, Jewish faith. 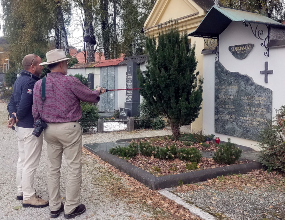 On our short walk back to the center of the town, Mr. Žakelj headed to the Capuchin monastery and talked to the priest, who sent us to a 90-year-old woman at the local flower shop. She might know someone who knew Joe's family, but she was out. Time for 'an abracadabra', as Mr. Žakelj put it.
He pulled out his phone, in his one nod to an internet connection instead of a human one. Online, he discovered that someone had published a family history. Unable to locate the author, he called the book's publisher. Shortly after he hung up, the priest from St Jacob's returned his call. The priest knew that Mr. Bernik still had family - a nephew - in the area.

Mr. Žakelj's calls had started a series of little stones rolling down a hill. Each of the people he reached had called someone else. Or, as he would later describe the process: "When I lit the fire, five connections opened up."

One thing led to another and we found ourselves at a cafe, drinking coffee with Franci Feltrin, a close friend of Joe's. Mr. Feltrin had succeeded him as president of the Slovenian World Congress, which Mr. Bernik founded. (The organization which helps unite Slovenes abroad with their compatriots.) We had an animated conversation about Joe and the Slovenian independence movement. Mr. Feltrin understood but did not speak English so Mr. Žakelj translated.

The next thing we knew, we were following Mr. Feltrin's car to the storybook community of Puštal, where Joe has been born and raised. We stopped at a house that had been in the Bernik family for several generations. The two-story white house enjoyed a view of the river and rolling hills beyond.

We knocked on the door and met an athletic, middle-aged man - the nephew, Mr. Matjaž Ovsenek. He seemed a little taken aback, but Mr. Žakelj explained why we were on his front doorstep. Soon, at his kitchen table, we were deep into a conversation ranging from the Bernik family to Slovenian independence. Mr. Ovsenek's wife offered us homemade wine and walnut liqueur. 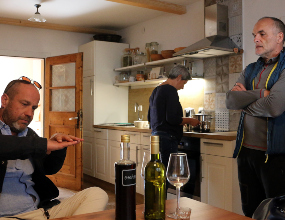 That lovely afternoon unfolded in the space of a few hours. I had intended to visit a friend's grave and learned that I had set my sights too low. Even if I had spoken Slovene, I would have likely gone to the cemetery and called it a day. Instead, an unlikely series of events had made plain the notion that the ties that bind are human - not digital.

For Mr. Žakelj, the afternoon was another day 'at the office', but to me, it was a reminder of how easy and limiting it is to deal with people only online. And how actually reaching out to fellow human beings has become anathema, and that it simply doesn't even occur to me most of the time. I've traveled widely - to Mt. Everest base camp in Tibet, to Oaxaca, Mexico, for Dia de los Muertos, To Indonesia and elsewhere - and my wife and I have always made it a point to try to see how people live. On this trip, In a town with a thirteenth-century castle, I learned that the kindness of strangers can also point to the road less traveled - if you let it. Watching Mr. Žakelj apply 'zrihtati' on my behalf, I was able to celebrate Joe's life in a special way, simply because via 'zrihtati', someone knew someone who knew someone...