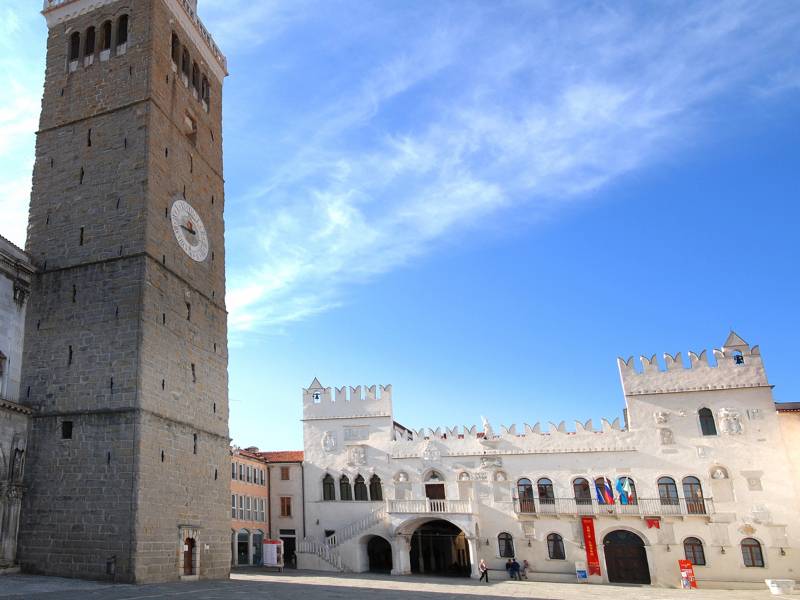 City-spirited main square in the biggest town on Slovenian coast

In general, any town's main square accumulates the energy of all who have walked over until the moment you are there.
Tito's Square in Koper is architecturally Venetian; spiritually though, the crossroad of prevalently Slavic and Romance, partly also Germanic cultures. The same as in the rest of Slovenia, the only country in Europe where its three main culture groups are getting together, and where every micro-region is differently composed.

Tito's Square evolved from what once was called 'Platea Comunis', a place where important public issues were discussed. It is located on the most elevated point of the former island, which was crucial in medieval times when the enemy was coming from the sea. The square was a meeting point mostly for the town's nobility.
A characteristic Venetian-style piazza is surrounded by the town's architectural jewels: Cathedral, Bell Tower, Praetorian Palace, Loggia, Armeria, and Foresteria.

The Cathedral of the Assumption of the Blessed Virgin Mary, or shorter Koper Cathedral, is among the biggest churches in Slovenia with its 70m (230ft) of length and 25m (83ft) of width. The majestic church with three naves, one main and four side altars is reportedly the sixth church on the same site originating from an Old-Christian basilica, turning into a Romanesque church in the 12th century, and taking last major reconstructions in the 15th century after a big fire, and in the 18th century just before the dawn of the Venetian Republic, in the time of so-called Venetian Baroque. 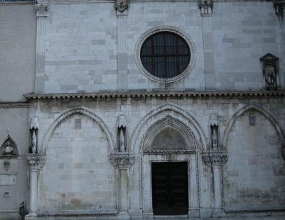 The historical eclecticism is perfectly shown in the eastern facade - groundfloor the Venetian Gothic with pointed arches and saints in niches, the part above pure Renaissance rose window, inspired by the art of prominent Lombardo family from Venice. The cathedral still boasts several artistic masterpieces of different historical periods, among them the priceless Renaissance 16th century painting of the Madonna with Child on the Throne of Saints by Vittore Carpaccio, comparable to the masterpieces of the time in the world-known museums.
The church is rich in white marble, which is not common for the continental part of Slovenia. Venetians, smart medieval sea traders, brought masses of marble from their bases around the Mediterranean and the Middle East, including colossal blocks of antique ruins, which were then integrated into the palaces and churches. Inside the cathedral, 18 massive columns are expressing the importance of Koper, the Venetian gate to the north. The same in marble, behind the main altar, the 15th-century tomb with remains of Koper's saint patron St Nazarius, who reportedly walked the sea and healed the diseases. 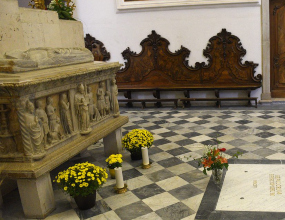 A tip for future visitors of Koper Cathedral: in 2021 they are about to activate the second-biggest musical instrument in Slovenia. A 16-ton organ was made by the famous Swiss organ makers Kleuker and Steinmeyer in 1989, following the plan of Jean Guillo, a world-famous organist who personally cooperated in the re-installation of the organ into reportedly one of the most acoustic churches in the world.

Koper Bell Tower is the highest Venetian construction in the area, apart from the port cranes, and brutalist 'beauty' Tomos Skyscraper from the 1960s'.
In the early Venetian period, the 53m (173ft) high Koper Bell Tower was built as an observation tower, separated from the church. It was a perfect observation point providing a view down even to Venice (about 110 nautical miles away) on clear, sunny days. In the 15th century, in time of Venetian Gothic renovation, the church was enlarged and united with the tower, which in the same period to the still present clock. The last reconstruction of the tower happened in the 17th century. One of the bells is the St Nazarius bell of 1333, the oldest still ringing in Slovenia.
The way up to the panoramic plateau comprises 204 stairs, no elevator, costs 3 euros. Or even better with the Koper Card. You'll be awarded a mesmerizing view over the coasts of Italy and Slovenia; in addition, you can get even the Alps if the weather is enough dry. 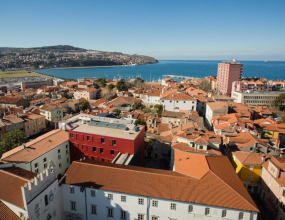 In the early Venetian era, the town's main authorities either Podesta', who held both civil and military powers, or the Captaincy, or the Grand Council, used to lodge in two separated palaces connected with a passage. Then, after a turbulent period of revolts and Genoan raids, an outstanding Praetorian Palace of Venetian Gothic-Renaissance style was brought together during the 15th century as a sign of Venetian power in the city, with the facade finished in the 17th century. It immediately attracts the eyes with its specific serrated finish, expressing the support to the Ghibelline side against the Guelphs in time of wars for the papacy, and the statue of Justice in the middle. The facade is rich with the reliefs and coats of arms, representing the noble families of the time. The windows are peculiar, especially the Gothic 'quadrifora' (four windows in a row), symbolizing the importance of the building. More windows in a row, more important the palace was. The ground floor is connected with the first floor also with a staircase leading to the balcony, where the town's messenger was announcing the news from. An original relief in the groundfloor passage, the so-called Bocca del Leone or Lion's Mouth, is expressing a once-opened stone plate, where the citizens could anonymously leave notes and complaints. 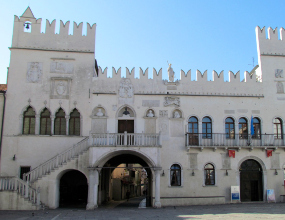 Praetorian Palace was a Venetian governor palace until its fall in the late 18th century. Later, either in the Napoleon's, or Austrian, or Italian period, it was in decay. Today, it was given the original role. Besides the city council, there are offices of the Koper Tourist Organisation, where they provide you the information about the highlights of Koper, wine tastings in this part of Slovenia, tours around the coast, such as Izola, Piran, Portoroz, and the coastal countryside, or to other parts of Slovenia such as Lake Bled, Bohinj, Ljubljana, Maribor, Ptuj, also hiking and cycling paths around the area, and much more. Next to the offices, the Pharmacy Museum, and the wedding hall.

Koper's Loggia is the only preserved Gothic town hall in Slovenia. The open arched communal hall was dedicated to public discussions and civic ceremonies. At the end of the 17th century, the second floor was added and the complete building was enlarged. Today you can enjoy a coffee downstairs, while upstairs you can have a look at one of the regular exhibitions of contemporaneous art. An interesting detail is a statue of St Mary with the Child in the corner niche of the building, a donation of the citizens for the salvation from the Plague. 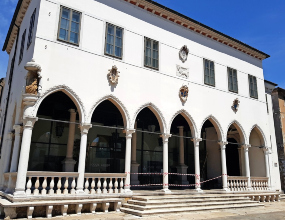 The former Armeria and Foresteria palaces are now one building, hosting the University of Primorska, the third public university in Slovenia founded in 2003. (The first Slovenian university was founded in Ljubljana in 1919, the second one in Maribor in 1975.)
Armeria Palace, leaning on the Praetorian one, had been military storage for centuries until it was turned into a saving bank Monte di Pieta' and offices in 1550. In the 18th century, another floor was added, and Armeria was joined to Foresteria in which the authorities hosted the guests. 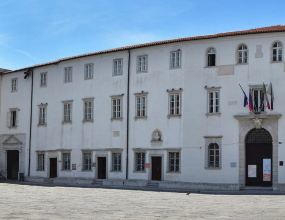 On the edge of the square, the simple yellow building is the pharmacy. I'm mentioning it because Koper, thanks to progressive Venetians, was the first town in the area of present-day Slovenia with public pharmacy already in the 14th century, soon after the pharmacy was separated from medicine. 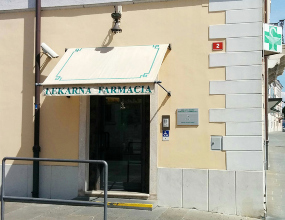 Hope you won't need a pharmacy when visiting Koper and Slovenia.
If you'll need any information about the places, feel free to contact me.